How dirty is your sleeping pillow?

The subject of dirty pillows has hit the mainstream and even prompted the popular television show ‘Good Morning America’ to air a segment on dirty pillows. At Vero Linens, we agree that sleeping pillows are too often neglected and can become very dirty.

This reality led Good Morning America to do some testing of its own. The staff took to the street and asked random people if they could test their pillows. Eight different pillows wound up being tested by microbiologist Charles Gerba, a professor at the University of Arizona.

The professor’s test identified varying degrees of cleanliness, although all the pillows tested showed traces of the following:

The reason behind these findings is attributed to the fact that sleeping pillows are regularly exposed to many things that contain bacteria, such as body oils, saliva and your skin. Actually, skin dander is a primary source of food for dust mites.

Even though pillows are covered with pillowcases and, hopefully pillow protectors, many things will still seep into your sleeping pillow. And, in many instances, things will begin to grow. ABC News references certain “Experts” who recommended sleeping pillows be replaced every two years. We think this is good advice, particularly since we sell pillows. But here are some more free tidbits and advice.

Here is our video on how to launder a pillow. 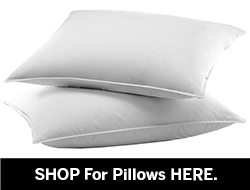 When you are ready to purchase new feather sleeping pillows, soft down sleeping pillows or any other fine bed linens, be sure to check out the wide selection of bedding products at Vero Linens. We also offer luxury duvet covers, baffle box comforters and many more elegant linens made in Italy.

You may also be interested in the following articles: